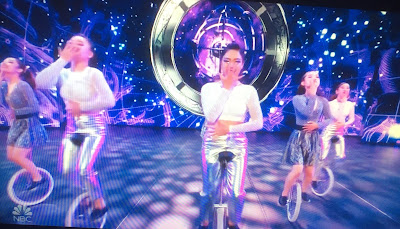 Okay, Simon, why are you so afraid of the circus in your own show? Is that why you haven't the guts to give its best moment the honor they deserve?

I am starting to look deeper into the win history of America's Got Talent.  And I am finding what should not be a surprise.  Most of the winners are the singers.  A few are magicians and ventriloquists

Top dog?  Only once did a real circus act bark off with top honors -- an act introduced to Americans in 1989 by Cliff Vargas --- surprise! -- Olate dogs.  You did know about Simon and the dogs?

Runner up? Only once, to an acrobat

To be clear, I only watch parts of these drawn-out episodes.  I have seen so-so circus acts, now and then the occasional star turn.  There were three men this season doing, from a bit I caught, a fantastic balancing act. They brought the judges to their feet, as the judges sometimes do for circus acts.   You might get from Simon rare verbal acclaim -- "The best act of your type we have ever seen here!"  Maybe even "the best I has ever seen  anywhere!"  And how exciting to hear, Simon.  And where from there?  Onto no where.  Pumped and dumped.

Here's my best guess: Simon does not want to risk giving circus the prime attention he gives to the singers, lest he produce the image closer to a vaudeville show than a singing contest, right?

Other night I tuned in and saw three acts standing on the stage -- only one would be named to go to the finals. One of them were a terrific group of ladies on unicycles who turned in a dazzling display.   Would they get through?  Of course, not.  Another singer was plucked to stay the course. Singers ... singers ... singers ... BOOOOORING.

Rigged? Who really knows but Simon and his cronies.  I've read the audience may be mostly what are known in Hollywood as "audience extras," meaning paid shills to fill up the seats. Better yet, to take their reaction cues from scripted signals.  There are plenty of complaints out there alluding to rigged judging, and I have to believe them, simply because I believe Simon will not dare turn his precious little let-me-hear-you-sing showcase into something closer to a Barnum concoction.  Thus, they use 'em for come in, shun 'em at finals.

I have noted here how lucky we are to at least have America's Got Talent, if only for the continued national exposure it gives to circus arts. Which means that it will continue to infuriate me.

Posted by Showbiz David at 5:30 AM