How Sad it Makes Me Feel 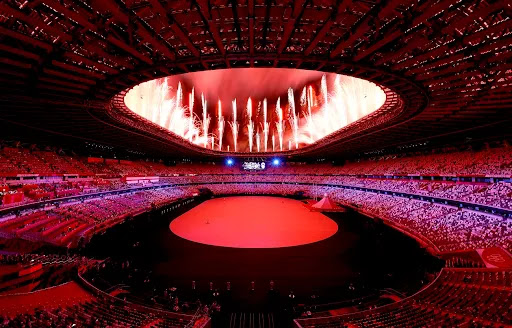 Train Ride to Sane and Serene 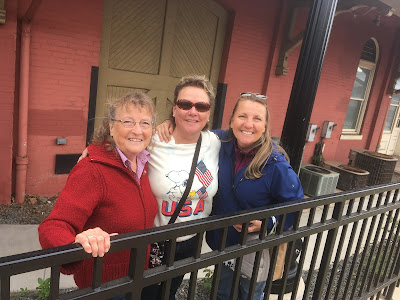 Greeting me at the Culpeper, Virginia train station: Sister Kathy, once employed by Sigmund Travel in Pasadena, niece Debbie, who handled the phones for American Express/travel, and niece Lisa, 20 years a flight attendant at United. 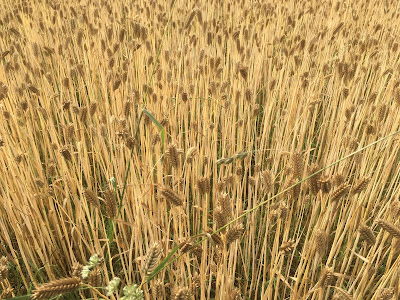 Waking up to a bright golden haze.  We are a million miles from the state of insanity out on the far west, hell bent on denying even nature it’s ways and dictates. Hell bent on rewriting the script of human existence.  The freaks are now running the show in San Francisco. 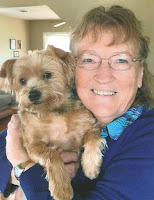 We drive to Luray, pop: 4, 800, nestled in the Shenandoah Valley, where normal is still in fashion. Oh what a beautiful feeling!   First stop: Kathy's house on Willow Street. In the mornings, we take walks with her little dog Scooter along the Green Way, a lovely river stream winding through downtown. Scooter is a go-to attraction all in himself.  The way he lavishly licks you upon entering.  The way he can look up at you. STARE at you.  At one surreal point, by the sounds of his almost audible grunting, I could swear we were that close to actually conversing!

A few night later, to the world of Lisa, her husband Brian, and son Noah I go.   Their 18 acre spread is  surrounded by farmland — cows to crops.  The glow of barley now covers an open field directly in front of their house, now rented to a nearby farmer.  Howdy, neighbor, howdy seeds!

Riding the Rails of  Bureaucracy 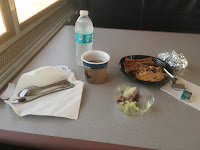 To get me from here to there, Amtrak’s perky little Cardinal out of Chicago railed through what felt like a living painting of lakes and streams and deep green  mountains rising undisturbed.  I'm calling this my second favorite train ride, second only to the Coast Starlight through Oregon, The Cardinal’s staff is something of a fiefdom unto itself, bending the rules a tad and coming off a little more human -- the perfect fit for treading the uncertainties of a pandemic. This is your down home train. Note the Corona-crimped table plating.  Food is quite tasty, if a bit mashed together.  Amazingly, coach passengers are denied access to it, but stuck at the heartless sodium dispensary (aka: lounge cafe). A shame.  Amtrak's lame excuse: With distancing, we haven't the space to seat them. But, you haven't the room for take out?  This really shocked me.

Not so down home or comfortable are Amtrak’s super pricey bedrooms.  After sampling them three times now, I am walking, no running back to the more user-friendly little economy compartments, and here’s why:1.  Sound through the walls is louder then in the small units.  2.  The toilet and shower are squeezed into such a small space, it can be an ordeal to maneuver in. And I am skinny. Are you not? Good luck. Compared to this,  the public toilets downstairs are a spacious luxury 3. In the smaller compact economy compartments, you have objects closer at hand to grab if the train throws a curve at you. 5.  When the lower bed in the bedroom is down. you get about five inches between it and a cabinet with sink – and the door to exit.  So, I’d suggest bringing a bridge ladder or be prepared to crawl or high jump over the bed  to reach the door.  A MAJOR design flaw. 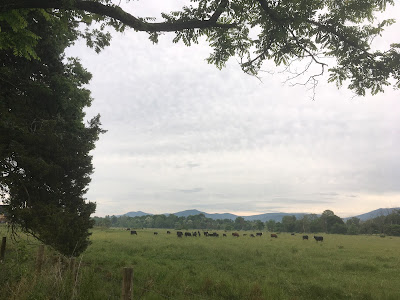 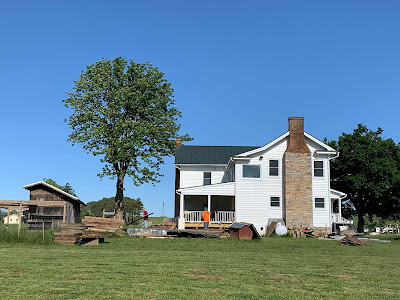 Out Lisa and Brian's way, I stayed in the latest addition to their property, actually an old abandoned farm house on the grounds, built c. 1880, which they have magnificently renovated.  At daybreak,  I slip through a door in my bedroom out onto a restful porch. Spotted Lisa dabbling around her two ducks.  The breakfast she served me included lettuce fresh from her baby garden. They are not farmers per say, although Lisa is dabbling in ducks and vegetables and maybe chickens. Corn will soon be on the rise. 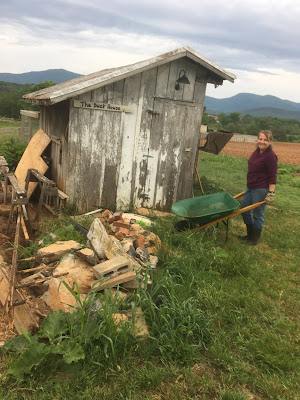 This old shed is deliciously authentic. 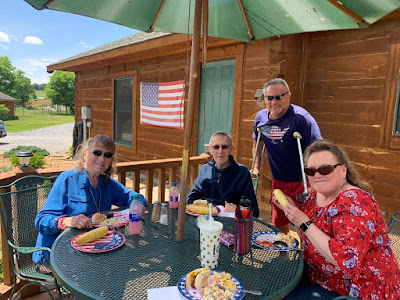 Captain Sky (Brian, who pilots for United, here recovering from surgery) barbecued some great blackened hot dogs and whipped us up strawberry shortbread, served  out on the east deck  of their  large wood house, which they call "the cozy cabin."  This is what sold them on moving up from Florida to Luray.  To get to work, Brian drives back and forth to DC, up to two hours each way. 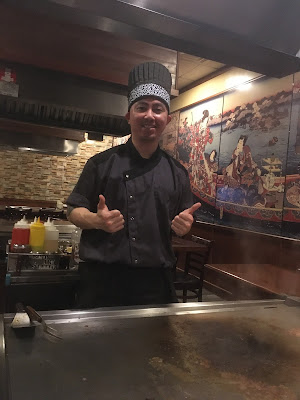 The grill his stage, the utensils his props 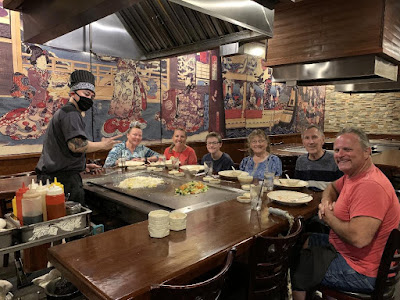 One evening we drove to the town Front Royal, to be regaled around the Mikado grill by Chef Anon from Indonesia. He juggles utensils, and taps them against the grill, producing  rare waves of clicking sounds. He paddle-tossed shrimp to open mouths, and managed to land one or two.  The one for me landed on my left lens, and got a laugh.  This is a big event – the most entertaining meal of my life.  What a showman!  And then I was told there are many like him in other eateries, having been trained in a long Japanese tradition.

Not to overlook American soul food, another evening, chef Kathy had us her over for a wonderful spread of roast beef, mashed potatoes, all the fixings, topped off with apple pie. Mmmmm yummy good. 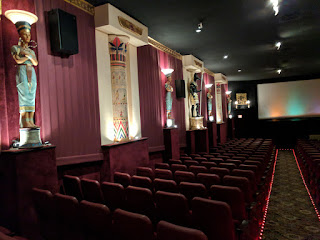 Somewhere in the scramble of action from barnyard to board game, we took in a movie at the Page Theatre, a multi-plex operation still in operation, thanks to the family who bought it and are keeping it on life support.  The film was  Disney’s high voltage Cruello, in its best moments riotously funny. Haven’t laughed that hard in a long while. This town incredibly now has three stages.  What next? The Luray Metropolitan Opera?

My board game, Cant Stop Shopping, created with friend Boyi Yuan, is finally-- maybe -- taking off. With the addition of Act On coupons, players have more options – rolling dice or playing them.  And here am I, once again losing, this time to Debbie, down from Alaska'.  Shame on me! 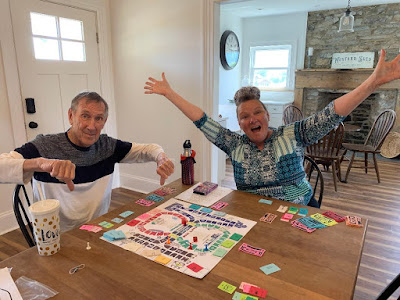 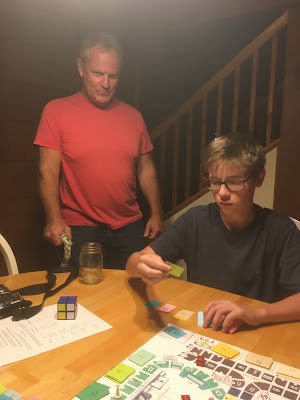 Brian, observing  shrewd shopper Noah plotting, dubbed his son a "15-year-old capitalist."   Noah recently landed his very first job, as a guide on weekends at the Luray Caverns, a big tourist draw for the town.  He loves it. Last weekend, the place was swamped with Indians from India.  They do love their caverns, I believe, recalling Forster's A Passage to India. 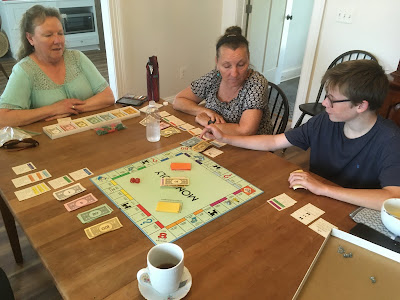 Just when I had about given up on ever getting back the fun Monopoly had once given me, a turn of fate and a kid named Noah revived it.  There I sat, about to wipe him off the board, when this cunning little sneak charmed me into selling him for outrageous sums of money— where did he get it all? — property on the cheapest side.  He then  preceded to build off of it an empire of quiet retaliation.  Gotta concede, it was fun being demolished by so sly an opponent.  Next time I face Noah, I am having legal counsel at my side, preferably somebody from the better business bureau. 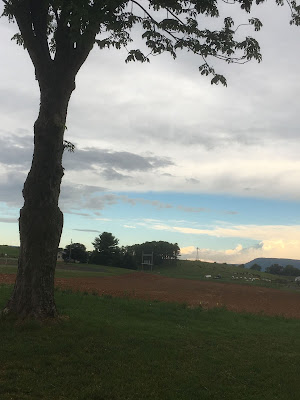 I Talk to the Trees

Lisa pointed to “the grove,” and I did not see a grove.  She focused on a lone row of trees in the distance and I still did not see a grove.  Then she walked me over there, and I was soon feeling something , let’s call it transcendental.  At the end of the row of trees,  a few  almost formed a kind of  circle, and in it I almost felt a connection to Waldon Pond – without the pond. I went there again. Perfectly still, tranquil, detached.  So many moods on this plantation. 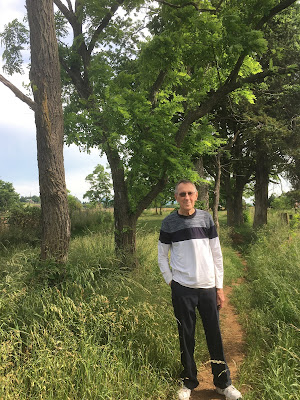 Lisa and Debbie took the train ride with me, as far as Chicago.  Never have I traveled through a state so thoroughly enveloped in green.  Au Revoir, fun family of Luray!

Posted by Showbiz David at 4:20 PM

What a wonderful family I have! I love and am thankful for every moment I have with them. Here in Luray, we cherish each year when my brother comes to visit us from the West Coast,and my daughter visits from Alaska. Life is short! I thank God for all our time together. Daid, thanks so much for this wonderful story of your time recently spent here in Luray with us. I wish everyone cherished their family like I do mine.

And thank you, Kathy!

Thanks for posting these wonderful pics and stories, Mr Showbiz. Those are the images and family values that I think of when I think of America (It's why I love country music!) I love the sight of Old Glory hung with rightful pride on the side of the cabin. I hope you are refreshed by your stay in the heartland. Good wishes to you and your family from over here in Old Blighty.

Welcome back, Sir Douglas! Farm life (okay, without the work) is so calming. Waking up to walk out onto the back deck and watch my niece at work in her little garden, is prime time. And birds chirping crystal clear. Very refreshed,thank you!

Thank you Douglas McPherson for your heartfelt words. I loved hearing them. God bless you and your beautiful heart.