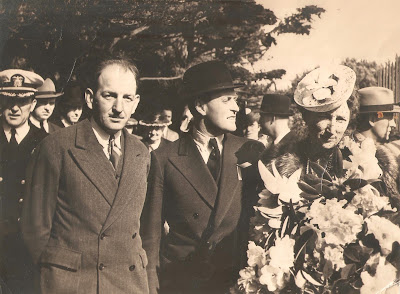 Last night, while watching Crossing the Atlantic on Masterpiece, the memory of an old family photo came provisionally alive in my mind.  Was that the time when my father hosted two royal figures from the Old World?

Crossing the Atlantic depicts the relationship between Franklin Delano Roosevelt and  the Crown Princess Martha of, Norway, on her second  trip to America, hoping to win FDR's military support for the war.  In the third episode, (I missed the first two), mention is made of a previous trip the Crown Princess made the year before, and with the Crown Prince.  Hold on! Could that be related to the old photo I have?

Yes!  There they are, in the western edge of Golden Gate Park in which I was raised.  How I wish I had asked my mother if she could recount the visit for me. I had not yet entered the scene.  My dad, I assume, must have shown them around the park, surely the windmill, not likely into our house that stood above it on a small crest.

Why the royal visit?  Maybe something about the flowers.  Or the windmill.  Or Norway's close connection to Sweden, the country from which my grandfather had immigrated as a young man. Or my father being a member of the Coast Guard, with a station at the edge of the park.

I love this photograph, for in my father's eyes, gazing directly at us (he is seen here, left in the trio),  I see a soft and fulfilling sense of what --- pride, accomplishment, recognition? Surely a highlight in his short life -- I was only six-years-old when he passed away.  He was employed by the city of San Francisco as grounds keeper for the west end of Golden Gate Park, which included his tending its famed Dutch ("North") Windmill.  Across the street, he also worked as an electrician for Playland-at-the-Beach, and by night during the war years, guided passengers onto and off the thrill trains of the Big Dipper roller coaster, which was managed by my uncle William Schmitt.

Now, I've got to get my hands on the first two episodes of Crossing the Atlantic, to see if the Crown Prince and Queen's first visit is dramatized. And how far it may come to covering Golden Park and my dad.  On the back of the photo I have, there is this inscription in the most elegant hand: "Compliments of  Gron  [?] Foundation. To Mr. E Hammarstrom. May 1939.  Visit of Crown Prince Olav and Crown Princess Martha of Norway." 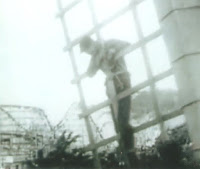 My dad was talked about in the family for how he scared my mother to the death when he took one his full circle rides  on a wing of the North Windmill.

I assume that is him here. 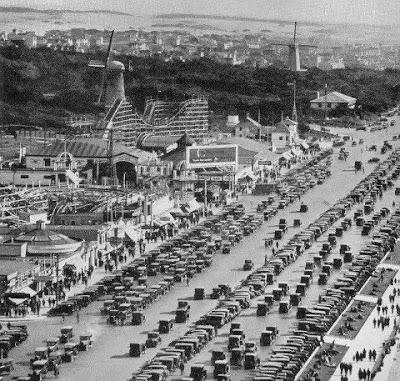 View of the Big Dipper roller coaster and the North Windmill, directly across the street

Posted by Showbiz David at 8:51 AM