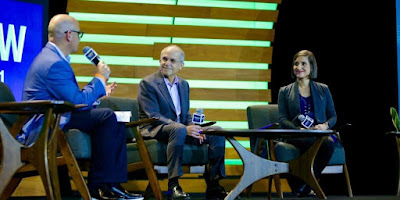 There were tears in my eyes when I read this  And there were tears in the eyes, too, of a "choked up" Juliette Feld Grossman, seen above, breaking the news to an applauding audience in Seattle that they are "casting for a new version of the Greatest Show on Earth."

She was seated next to her father, Kenneth Feld, who shared a vision of renewal for the most famous name in the circus world.  They talked of a "reassessment of the operation with an eye toward doing things Feld Entertainment has been doing for decades, only better."

"We looked at our company like a 50-year-old startup," said Kenneth.

Juliette, who looks at the moment to be the heir apparent of the family throne, stressed  the perpetual value of live entertainment before families, of how for decades, many voices had been telling them that virtual reality and artificial intelligence would "replace what we do."

But there was something conspicuously missing, however, from her following quote:  "There is nothing like going to an arena, theater or stadium and being part of that momentary community, to be swept up in the excitement and the action and the experience of it all."

The word "tent."  In fact, not the theater or the stadium or the arena are central to the still-operating circuses in the UK,  not even to the once, and maybe still, powerhouse on the lot, Cirque du Soleil, which once tried to sell its shows under hard tops and struck out.  They could fill up maybe 3,000 chairs. A whole arena?  Not even close.

But most conspicuously and ominously missing from the headline came through in two words I wanted to push back -- two words that instantly deflated the bright victorious balloon of this announcement:

"The circus is coming ... back.  Feld Entertainment plans an animal free relaunch of Ringling Bros. and Barnum & Bailey in 2023."

And how empty and impotent the occasion felt.

And by the morning after, the tears in my eyes have dried, as I am left wondering if they are not once again charting a major reboot with a built-in fatal flaw.  When four years ago, Kenneth Feld, in a concession to the animal rights movement, removed his elephants from the show, at the same time by not removing the big cage acts, he nullified the action, leaving the door open for PETA to stand firm at the front gates with placards and pamphlets in hand.

And now, "animal-free" feels like a rash sell out to modern culture -- a kind of pandering to the crowds that may or may not still fill up the tents of Cirque du Soleil and of, it would appear, the majority of circuses across the pond.

So, at the moment, to quote an old song, I guess I'll hang my tears out to dry.  One thing feels certain: This should be one heck of a story to follow.  The Felds have millions to spend. They have vast resources at hand to draw from.  Kenneth Feld is one of the smartest showmen who ever lived. But he, too, is human and prone to making wrong decisions, as all the mighty are. The next steps he takes may be the most critical in his career.  Pray he gets this one right.  Innovation will always be a big factor. So too, tradition.

Thanks to Don Covington tor linking  the news release my way.

Posted by Showbiz David at 8:12 AM

I have followed and reported on this, but partly swayed by others and virtually no media attention to earlier isolated announcements, grew a bit skeptical that it would happen. Now I have good reason to belie e it will. Cheers to the White Tops running with the story, and best to you!