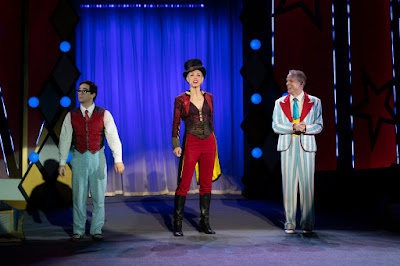 
How Much Do Circus Performers Really Make?

OKAY, FIRST OF ALL, to prepare you for my headline issue, what do you suppose the average circus performer makes in this country?  I would have guessed  between $20,000 and $40,000- $50,000 a year — maybe the rare ones up to 80, 90 grand.  Ringling may have once gone that high for the likes of a Bello Nock, and I wouldn’t be surprised if Barry Lubin was getting over a hundred grand from Paul Binder for his delightful Grandma cameos.

I did a little goggling, and settled on the figures supplied by Salary.Com, looking at Cirque du Soleil, which I imagine pays more than any other still-in-biz big top, anywhere in the world. To quote:

Okay, onto the Big Question: Why did the new Big Apple Circus owners offer three performers $200,000 each for five months of work in the so-called indoor unit, the one that never made it off the ground? And we are not talking Monte Carlo Showstoppers.   We are talking two clowns – Adam Kuchler and Mark Gindick --- and last season’s ringmaster, Stephanie Monseu.

Tour was aborted five days before it was slated to go on, "low ticket sales" the cause.

How do I know this?  Because the New York Post reported last Saturday on a lawsuit filed by the three plaintiffs  in the  Manhattan Supreme Court. Plaintiffs allege they have signed contracts, that they were let go without compensation, thus having to find alternative bookings for 20 weeks of work lost.  I doubt they could have landed such loot elsewhere.   (You may recall another lawsuit against Big Apple Circus, reported here, by two parties claiming they were promised upper-management positions, and then pushed aside and out the tent, without compensation).  Do I spot a trend here?  I have nibbled around the edges of what feels like cloudy ethics in play, to post it politely


Who is Really in Charge?

The two-hundred-grand figure alone tells me that this show is being run by amateurs. But then, if this Sarasota-funded outfit really doubled its tickets sales at Lincoln Center last season, as heretofore claimed by current CEO,  Gregg Walker (over those of the first season out), that points to a brilliant mind at work.  Whose mind?  The same mind  at work now?  Which brings me back to the subject of Neil Kravnazh --  the retired spinal surgeon to the Supremes (of the court),  accoladed for having “saved” the circus.  Whatever happened to Kravnazh, who was generally profiled as the man very much in charge of every aspect of BAC.    According to Walker, he, Walker, has been at the helm since last summer.  But the doctor was still being quoted in news reports about the circus as late as this past March. Did somebody fail to inform him that he was no longer CEO?   And why?  If another person was behind the soaring ticket sales, Walker seems the likely one, I can see that marketing genius grabbing the power away from the doctor. My best guess.   You realize, of course, the soaring sales were talked up by Walker, but, to my knowledge, not independently confirmed.

END RINGERS:   Barnum is back in fresh print, credit two books, one just out, the other ten years ago..  Barnum: An American Life, is drawing respectable though not glowing notices, while, The Great and Only Barnum: The Tremendous, Stupendous Life of Showman P. T. Barnum drew raves when it was released in 2009.  I'd like to read it ...  Public respect for circus plunges: Just look and listen around, rather shocking.  Ringling’s exit was received with a collective shrug, the public and media sighing, sad, but, yes, it was about time.  Those poor animals.  Circus is a thing of the past. ... Comments at the end of circus articles, one after another, echoing the same anti-circus animals, even clowns, tone: It’s about time! ... The same ill-wishers may not be so happy if race tracks are shut down, and if owning pets becomes the next big PETA-pronounced evil.  As they say, be careful what you wish for. 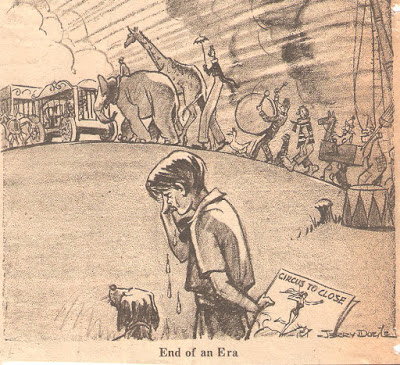 IN THE CLASSROOM, ALL IS WELL: Argues noted academic author Janet Davis, having penned an op-ed piece for the Wash Post, chirping that we are actually living in a very good time for the circus.  Arguing we lived through the same emotional frame back in 1956.  Really?  Back then, the public wept over the demise of the Ringling big top. Newspapers wept.  Editorial cartoons wept.  All of them to my knowledge.  Back then, the public en masse flocked to big tops, GUILT-FREE, to enjoy performing animals and slightly, lovable, eccentric (okay, devious) clown characters, along with the thrillers.  And back then, shows like Ringling-Barnum and Beatty-Cole did not fade into history books, but rebounded for another fifty seasons.  And what have we to support the Davis doctrine:  She cites two shows as examples of a still-thriving big top scene:  Circus Flora and Cullpepper Merriweahter ("still going strong").  Lame.  I’m canceling your course, prof.  Think I’ll enroll in Gender Detection Studies.  I hear the actively dating young are lining up to grab that one.


Many thanks to Barry Lipton for the New York Post link.
Posted by Showbiz David at 12:25 PM