Update, 8.7.22, 8:10 AM PST:   When I look back at this, I think that JRN II gave us the best of all possible worlds, perfectly suited to the new blogging atmosphere, for he did not resent it. He was laid back, he had a dry sense of humor, he took in every performance, and the company loved him. And so did we!  We loved  John's wife, Shirley, too. There were more circus bloggers, then, best of all, clown Steve Copeland, who with his partner Ryan Combs, filled the rings with their creativity. Some things hit pay dirt.  Steve's daily posts kept us all tuned in, what might happen next?  Johnny seemed unbothered by the freedom of his company to blog on as they wished. A rare ten years -- with echoes of Ringling royalty guiding the one-ring parade. I truly believe, as John told us, that when the animals had to go, so did he. Thank you, John.  You were a class act, and your father and uncles would have been proud. 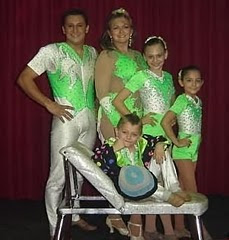 Yeah, been a long time since I dropped The Name up there. And know what, I think they're lonely for a little attention from yours unruly.

Truth is, and I got evidence, they want me they hate me they want me.  They like this blog when it flatters, can't stand it when it shatters.  Love my dropping their famous name, throw hissy fits when I don't.  Likely miss those first dates we took in the fresh beginning when the impression lent was of a Ringling about to, well, bring a little "Ringling magic" to the operation.  Remember people accusing me of spending too much time on this House of Ringling angle?

John Ringling North II claimed never to have promised any such "magic."  JR (James Royal) admits to maybe having dropped the “m” word (magic, kids).   A reporter right or wrong quoted it.

Haunted, they still are, by the respectable 2-1/3 star review I gave 'em back in 2010.  In fact, their pain has evidently become a crusade.  Now, one of them — Shirley North II, no less — wishing I would just "support circuses" -- characterizing my anonymous patronage that day in 2010 as a "covert visit." Gosh, am I that mysterious a character?  Her conspiracy theory, I will surmise, is based on my failing to make backyard.  To sign in and take the pledge.  Fact is, I, a late blooming purist, no longer venture into compromising territory. 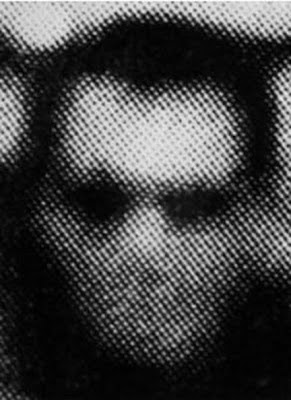 But they should be flattered that I did not go that day under the circus critics witness protection program.  Went in wearing my regular clothes, regular face.

Next time I visit Kelly-Miller, if there is a next time, Dear Shirley (we must stop meeting like this), maybe I should step out of a pumpkin carriage, in a cape with flourish, long as you promise a red carpet fanfare, spotlights, and VIP announcement, complete with waving ride round the ring in the Copeland and Combs jalopy.

The high-voltage Shirley North e-mail was waiting for the right moment to respond. Then it came, in the words of another, more discretely controlled Kelly-Miller provocateur reaching my way (are these e-mails part of a grand strategy to regain my shameless hyping of the House of Ringling?).

JR (sounds kind of cool, Jim?) sent me word the other day, "you will be pleased to learn that after weeks of dry lots, we have had a few muddy ones (I believe it would be appropriate to place ‘LOL’ here).”

HA!  Let’s all laugh out loud.  They know how to get themselves back onto this blog, and they are doing it right here. Have they no shame?  But there's a bigger reason restarting my overdrive than mud. 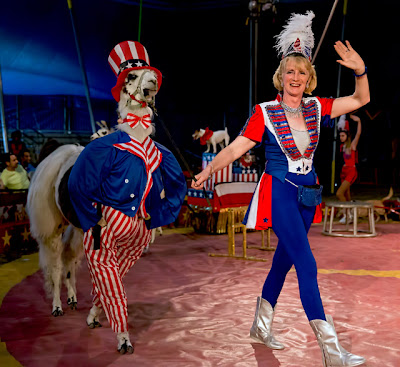 
What galls Shirley North the most is how I misrepresent her husband’s producing agenda for Kelly Miller.   "I thought to be nice to you," she wrote, playing the guilt card, "but that didn't work!"  So what next? A challenge from Kelly Miller's First Lady to downsize my precocious expectations.  Declared she, "I fail to understand why you think John wanted to out shine his illustrious family?"  In fact, I didn’t exactly.  But please, as did Ernest Albrecht in Spectacle, take a look at North’s name splashed immodestly on the sides of his trucks.

I guess then, that we should discount as spin from the north, what North the Sequel told Lane Talburt during an interview last year, recorded on film: “I want to own the best circus in America.”  Might this excuse my tendency to hold JRN II to higher than average standards?  To rue hula hoop acts and peanut pitches?  Oh, there I went, trying, really trying to be nice.

Continued Ms. North, "After one covert visit to view the show in Brewster NY on an impossible lot [excuse making?], you now just review the show by following the clown's blog." By the way, expecting mud, I was elated to find grass and weed and dry dirt.  In total, a perfectly charming day in Brewster, USA!

Very interesting.  In the land of Kelly-Miller North, anything I say, or perhaps worse yet, don’t say or say about some other show (are we onto something, Dr. Watson?), seems to be seized upon as some form of a veiled "review," as witness the above lament.  Or a coded Kelly-Miller crack.  Gaze upon the teeth below. Were I to attend with my name posted atop my noggin, think I'd get out alive?  I'd best go armed with dental floss for elephants. 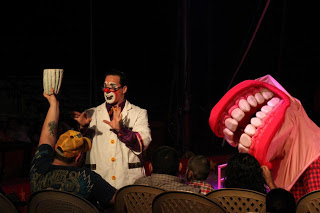 Heck, I'd pay just to see those audacious dentures!

Which makes me wonder how they reacted to -- or sought post traumatic counseling for-- the review by Mr. Albrecht last year, possibly less flatting than mine, which was posted, in full, by Steve Copeland on his post. And for that incredible indiscretion (might Stevie have been sending a message to management?), was he sent to his room, bad bad boy!  No play in your clown car for one week!

"You want to see it grow into an impossible monster," continues Shirley North in her showdown missive, "where the show would have to play in buildings because lots are difficult to find.”  Oh, paleeeeeze. Big Apple Circus puts on a world class show under a relatively small tent.

I’ve never done therapy, but I wonder if all of us – me and them – will end up on a trauma treatment trampoline with two overactive clowns serving as budget head shrinks?

Okay, enough. Now comes the Big Payoff. The Reason for all this verbiage.  Kelly-Miller people: THIS is what really provoked me, this time.   Back to JR:  "You were so disappointed in our website," he e-mailed me recently, turning my attention to the new website, which I had not seen.  I took a look.  I was awed.  I was taken.  Toto, I have a feeling we're not in Hugo anymore. [oh, shucks, can't I ever say something nice without side-swiping something else?]  One small step in cyberspace, one giant leap for Kelly-Miller. 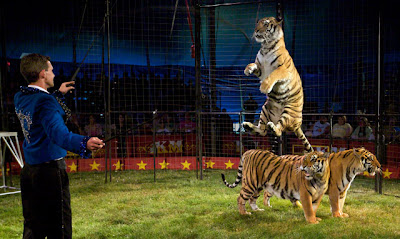 Ryan Holder in command: that tiger's got rhythm

The website design is unique.  Classy.   Suave.  Subtle. The streaming stills are stunning. Costumes bear a distinctive mark.  Remember, I gave North the Sequel credit from the beginning (are you smiling, Ms. Shirley?) for subtle costume design.  Best of all, JR, your PC home is not a warmed over version of its passive predecessor, but a  refreshing new concept shunning corny circus visuals.  Which makes me wonder, House of Ringling, when a brand new show as arrestingly novel as this brand new website of yours?  When, Shirley, When?  (Notice how, in desperation, I am now appealing to the boss's wife?) 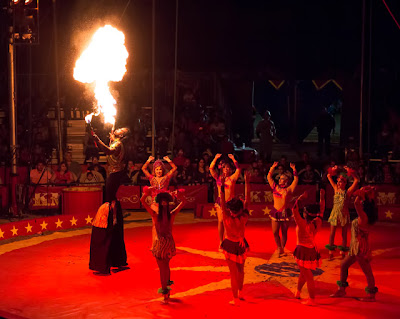 Now, as as for my overstating the modest goal of  John Ringling North II (according to Ms. North), then here’s a marketing angle, freely given, for a more apt and accurate pronouncement on the sides of the Kelly- Miller trucks:

And that’s a Ringling Wrap. 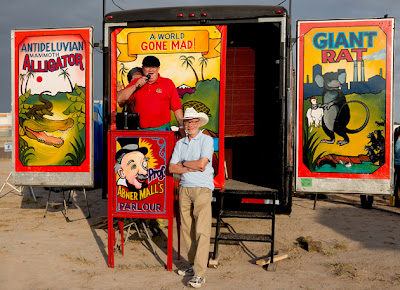 I had the pleasure of visiting the Kelly Miller Circus in Jasper, Texas on a very cold but sunny day.
Not seeing it last year I wanted to take it all in from the get go.
To my surprise John and Shirley North II was there and had not headed back to Ireland yet.
I am a die hard circus fan and like the tent shows the best as that is the real circus to me under a big top.
We all know the days of the 104 car railroad circus with a 600 foot top and 3 rings and 4 stages and seating 14,000 plus are gone with the wind.
Like D. R. Miller said it is a war and you got to win the war every day with a circus.
Kelly Miller has the tent, animals, live band, performers, painted up trucks and real clowns and circus folks with it and for it.
God help the person that does not take care of there animal as Shirley North will see to that for sure.
Mr. John is spending more time on his circus and is at every performance seeing what is going on.
I was setting in the seats and next thing I knew Mr. John was right next to me and said do you mind if I set here well I was thrilled he was there so I could ask a million questions.
Each year Mr. John adds to the performnce to make it better for the public.
I know on a traveling show it costs money and big money and it adds up and you got to make the nut to stay on the road.
You hope more money is coming in that going out.
Steve and Ryan always do a great job on there clown gags and they bring on the laughs.
All us fans need to thank Steve for his blog route book as his day by day with KM sure beats the one at the end of the season like they used to be.
The Rices animals are just super this year as Mike has liberty zebras sans of Al G Barnes from the past.
Carolyn has a mixed animal review with the help of Shirley North and the music for it is a foot tapper.
You get a good bang for your buck with the KM performance.
Mr. John and Jim Royal are a great team pulling together to make Kelly Miller succeed in these times of a so so economy.
To do what these show folks do every day you got to love it rain or shine.
As a fan I am looking from the outside in, into to a spun candy world.
But I hope these tent shows we have today make it as that is the real circus under the big top with the flags flying, painted up trucks, circus music, and a great bunch of show folks.
Thanks for all the great times as us fans have many great memories to carry with us forever from our favorite shows.
Harry in Texas

Thanks, Harry,for your wonderful affirmation of the tented circus, and you make some very good points about Kelly Miller's traditional content. 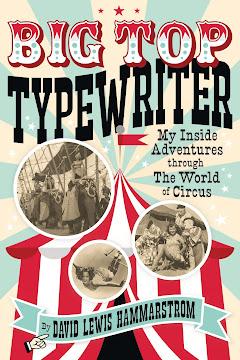 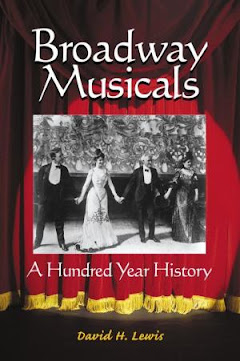