"I need somebody who trained in a 42-foot ring almost from birth and has the skill of an Olympic athlete, which is why we employ so many overseas people."

Oh my! And it couldn't happen to a worthier city than San Francisco -- ground zero for the subversion of Western culture.  Over there across the bay, where I was born, I now avoid it like its own plague.  Now, the streets are ghostly, shops boarded up, tourists gone, bums better off than ever before, living it up and shooting up in empty upscale hotels, businesses fleeing, bus rides fraught with freaky nut balls keeping you constantly on edge. How unexpected can unforeseen events change cities overnight. "Baghdad by the Bay" risks being zoomed into an empty metropolis begging for renters on fixed incomes.

And how sorry I feel for Esa-Pekka Salone, the new San Francisco symphony director, a man of world class stature from Finland, who will have to face this urban wasteland.  I marveled at many of the great and wonderful concerts he lead in front of the L.A. Philharmonic.

Facing a season without a hall to play to during lock-down, PBS broadcast a  weirdly ominous and unsatisfying one-hour preview of what Salone wishes  to accomplish during his tenure.  New sounds.  New voices.  New ideas.  Good enough. All incoming conductors these days say the same thing.  But Salone will need far greater works than those on display during the preview.

His chosen composer-musicians specialized in a form of straining minimalism, heavy on dissonance, woefully weak on music. And hardly all that new.  Terry Riley was already fostering this counter-culture form over fifty years ago. I still have one of his records.

A more unusual segment took place out in the open air, where a hip-hop artist and a dancing woman wearing a sweatshirt lettered BLM cavorted.  Yes, really.  But concert hall audiences still favor larger, more melodically expansive works. Surely Esa-Pekka must know this. Only a few years ago as guest conductor with the symphony, he piloted the orchestra through a thrilling performance of  Stravinsky's The Fire Bird and nearly brought the house down.

Inexplicably missing were more Asian faces.  They don't exactly excel in Da Hood, but they do in symphony halls around the world.  And in symphonic composition. Asian culture passionately embraces classical music.  Why not market to them? Knock knock!  They are a big part of your future.

When, finally, Esa-Peka Salone takes the podium with a full audience behind him, will he be wearing a sweatshirt  prominently lettered BLM?

Posted by Showbiz David at 8:41 AM

Can you afford not to support our sheltered out circusses? Wear the face of compassion! 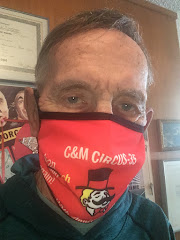