Rust in Peace: A Walk Among the Ruins of Clyde Beatty Circus ... 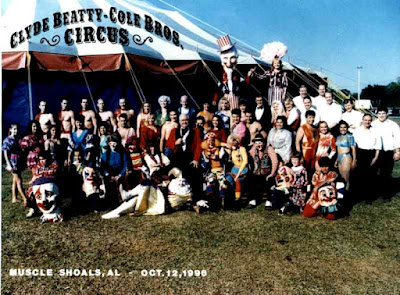 So much bad news continues coming my way.  Not yours?  Are you in dedicated denial? Or lost and hiding  behind old scrapbooks and movies?  Posters and photos?  Pretending that the "circus" show you just saw on a stage, at a concert hall or cruise ship, under a summer tent of students putting on a circus, is proof sufficient that American big tops are as alive and thriving as ever?

Sorry I don’t share your fragile fantasy.  But I do understand, CFA.

To look at the newest old photos is eerily surreal.   We are smack dabble in the middle of what may one day be a bleak and settled history of circus for generations to come.  We were there.

Tim Tegge was there/is there, too, and he  knows what is going on.  Maybe we all do, but for many of us, it’s too painful to face.  And so, any economy — or volunteer —  ensemble of jugglers and acrobats, a dog or two, a pair fluttering through the fabrics — will give the suffering imagination wings to magnify spangles into spectacles, match sticks into tent poles.   Culleppper & Merriweather, the new Ringling?  Ask noted author Janet Davis to explain.  Even the learned can’t cope. 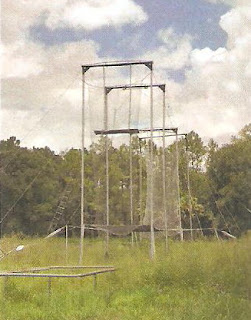 Tim and wife Barbara, on their way to a wedding in Orlando, stopped off to walk the aging, desolate grounds of now-defunct Cole Bros. Circus.  He clowned on the show from the end of 1994 through all of ‘95 and ‘96.  Bunked in room #85 on the joey sleeper.  “It will always remain ‘the Beatty show in my heart ... not ‘Cole Bros.”

Same for me, Tim.  I saw the Clyde Beatty Circus in my PC-deprived boyhood.

On his Facebook, reprinted in the soon-to-be-gone Circus Report, Tim remembers how ”invigorating and exciting” it was to be joining the show in the spring, when equipment had been freshly painted, and there was “more activity than you could possibly imagine!”

Going back now, Tim is  struck by the decaying condition of trucks pealing away, by the old trapeze rigging still standing, “rotting away in weeds and high grass.” In one of the lonely photos, a small green tree nudged up against a Cole Bros. semi looks as if to be coddling it out of sympathy and respect.

Tim cuts to the core emotion that all of these images produce in me  “Almost like watching a friend slowly dying from a terminal disease. It is painful and you're totally helpless.”

That once fine and proud and oh-so well run circus, the nation’s largest tent show in the indoor age of Ringling, rues Tim, “will never again take to the road.”

Never again. Did you really have to say “never,” Tim? 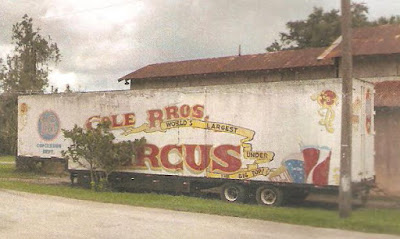 Posted by Showbiz David at 9:42 AM

Never say "never" Showbiz David... You never know when an old idea is successful as a "new idea". Truth be told: Its difficult to be a 60 something fan of the circus. You're labeled as a traditionalist even if you're not. The new styles of circus please me, youth shows, new wave, etc... I travel longer distances to see a traditional circus since I live in a PC piece of geography. CFA hangs in there for it's members and builds bridges in all directions to entertainments that appreciate the circus past, present, and future. No longer as involved with CFA as I once was, it's only to make time for new projects, including circus!